Disclaimer I Am Currently Trying To Help Organising Emerg 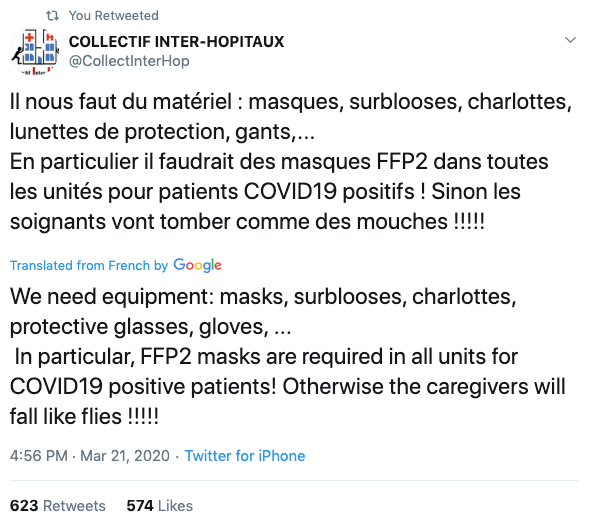 Disclaimer: I am currently trying to help organising emergency shipment of medical supplies and PPEs from China.

I am absolutely dumbfounded to have hospitals from main cities in France calling me to ask about potential sourcing of mask shipments through the Chinese diaspora. What is the state doing exactly? When hospitals in France, one of the biggest pharma country in the world, end up relying on the generosity of foreign nationals abroad for the survival of its staff, something has gone terribly wrong.

This is a quick note to reflect on all this - regarding the raising “masks diplomacy” I am witnessing first-hand where China, in its central role, has already supplied critical equipment to Italy while no European countries would help. — Europe has no production capacity for Personal Protective Equipments (PPEs, such as masks, gloves, glasses, etc) or medical equipment because of decades of short-sighted economic planning.

The chase for lower costs have lead to the relocation of all factories to China since the 90s, leaving most Western countries empty handed. China was producing more than half of N95 masks in the world prior to Covid19. During the last months, China’s gigantic production apparatus was repurposed to produce masks, reaching a throughput of almost 130M per day. It will now export entire stocks to EU and US who will continue to be hit very hard by covid19 in the next days and weeks. The same situation applies to the production of SrasCov2 test kits - a complete debacle outside Asia.

Even vaccine development relies extensively on research contractors in the mainland for clinical trials, and will hardly be possible without their presence. This issue of “health sovereignty” has been clearly identified for years and is common knowledge among specialists in defense and foreign affairs.

Despite repeated warnings, no politicians never acted on it. Experts were afraid of a potential war situation, but that is a pandemic that made their worst fear become reality. Western economies have consistently been trading production against capital growth, at the expense of the safety of their own people, putting China in position to benefit of the situation today.

It is only going to get clearer in the next weeks, as more medical team members and citizens keep dying from failure of EU and US states to provide them with relevant equipment and tests, awaiting shipments arriving from China. Medical teams in Europe and the US are going to work without proper protections in the face of a majorly contagious and lethal disease, effectively paying the price of decades of absurd past political and industrial decisions. The current unfolding of things is the result of mismanagement not only by current administrations - even though they have their lot of responsibilities in all this.

We are witnessing the failure of a whole system that has lost all its resilience, because it was optimised for the single factor of costs reduction. Blaming China won’t change the wrongdoings of our countries in EU or US. Our own greed is leading us into a sanitary and human disaster, now it is time to face it.