How does the rest of the world view the Hong Kong protestors?

In France, the media is largely supportive of the protesters that are presented as democracy heroes. Therefore, most French people have aligned their views with that - helped by the latent fear of China and their absolute ignorance of the situation in HK.

The romantic appeal of isolated protestors fighting alone a giant oppressive war machine is usually a sure sell in France. Problem is, this time many people are upset and dubious of the coverage exactly because the media bias is so obvious that it becomes really hard to believe.

What was called “radical violence” during the yellow vests movement is now framed as “creative technics” in HK. Journalists are getting all worked up about the brutality of the HK police, while what has been happening in the streets of France in the last months has been much more extreme - with dozens of beaten journalists, thousands of “preventive” arrests and 10+ casualties[1] . 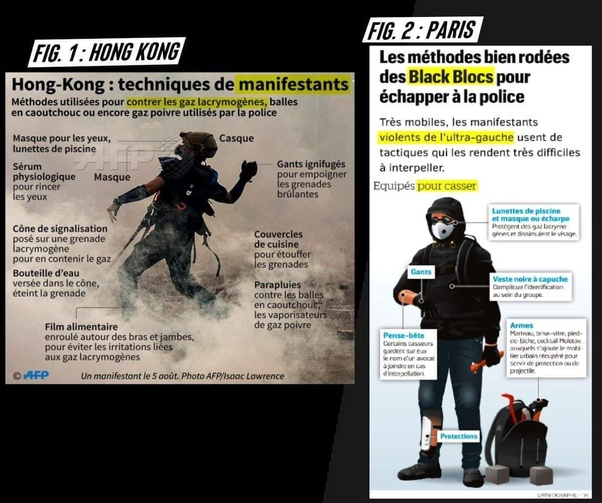 This is an image that circulated on social media, comparing coverage from protestors in HK and France by the French news agency.

As for the French political class, nobody has lift a finger - except some isolated guys trying to gain attention by playing the news. Unlike Trump, no French politician seems to be willing to trade the country’s relationship with China for popularity - everybody remembers the price paid by Sarkozy in 2008[2] . More importantly, unrests about territorial claims of independance sounds too close to home - esp with what happened in Catalugna in 2017[3]. French political class of today is more likely to support the HK police.

More importantly, it is vacation time in France and no politicians is willing to waste time taking dangerous positions while the French are at the beach enjoying summertime. The electorate won’t notice, why even bother? Footnotes

[1] French anger at police violence goes beyond Yellow Jackets [2] Clément Renaud’s answer to What is the relationship like between China and France? [3] Unilateral declaration of independence - Wikipedia

This text was originally published in quora.

« Is it true that China has surpassed the United States in carbon emissions and has more than doubled its output? Huawei, Xiaomi, Alibaba, Baidu, Tencent: outside of Asia, these companies were unknown to the vast majority of the population less than 5 years ago. What are the next Chinese companies that we will discover? »