Workshop : how to study makerspaces ?

“The Metropolis strives to reach a mythical point where the world is completely fabricated by man, so that it absolutely coincides with his desires.” ― Rem Koolhaas1

Recently, a specific type of places have sprung up over the globe to host social and technological experiments about fabrication and the act of making2. Populated by an eclectic array of people commonly called makers3, these makerspaces (e.g. hackerspaces, hacklabs, fablabs, living labs…) combine multiple and sometimes contradictory visions and utopias4 about new ways of living, producing and inhabiting the world. The current workshop aims at designing methods and tools to study makerspaces, by considering actors, tools, networks, and localized practices or discourses in larger socio-economics and political contexts across multiple sites5.

Studying cities has never been an easy task. Spaces are produced by imaginaries6, socio-political settings7 or technologies8 while places are entangled in hybrid realities9 and networks10. Since its formulation 25 years ago, the hypothesis of the creative city11 still remains an important cornerstone of urban design and policies. In a paper called The Anatomy of the Creative City, Cohendet et al12 identify three layers in this creative city : the upperground with formal institutions (firms, companies, public services, etc), the underground where resides creative, artistic and cultural activities without formal production, exploitation or diffusion and more interestingly the middleground which constitues “a critical intermediate structure linking the underground to the upperground” (ibid).

The idea of middleground has been partly illustrated by the concept of third places13, which represents social setups between home and office (cafes, libraries, events, etc). The generic term of makerspaces describes new forms of such third places that dedicate themselves to provide venues to the act of making, in and out the traditional contexts of work and leisure.

Making together and the study of assemblages

What are they? How can these makerspaces be defined? While they first exist as locations, these places are also embedded in larger urban assemblages14 of spatial, social and political networks15. Traditional approaches in social and human sciences (ethnography, statistics, interviews, discourse analysis, etc.) provide little guidance about the conduct of studies on such fragmented and discontinued objects.

Moreover, the passive position of the observer seems to oppose to the active stance of the maker, resulting in possible conflicts in the understanding of makerspaces. What can researchers make? How can makers lead a research about their spaces? How can the collection, record, mapping and visualization of information become the product of a common study? What should the study of making look like?

The workshop “How to study makerspaces?” took place on the 18th and 19th May, 2017 in Renens, Switzerland. During two days, we were hosted at Les Ateliers de Renens, an old printing factory repurposed into a creative cluster hosting a makerspace, a fablab, a bio-hacklab, a coworking space and many other initiatives. 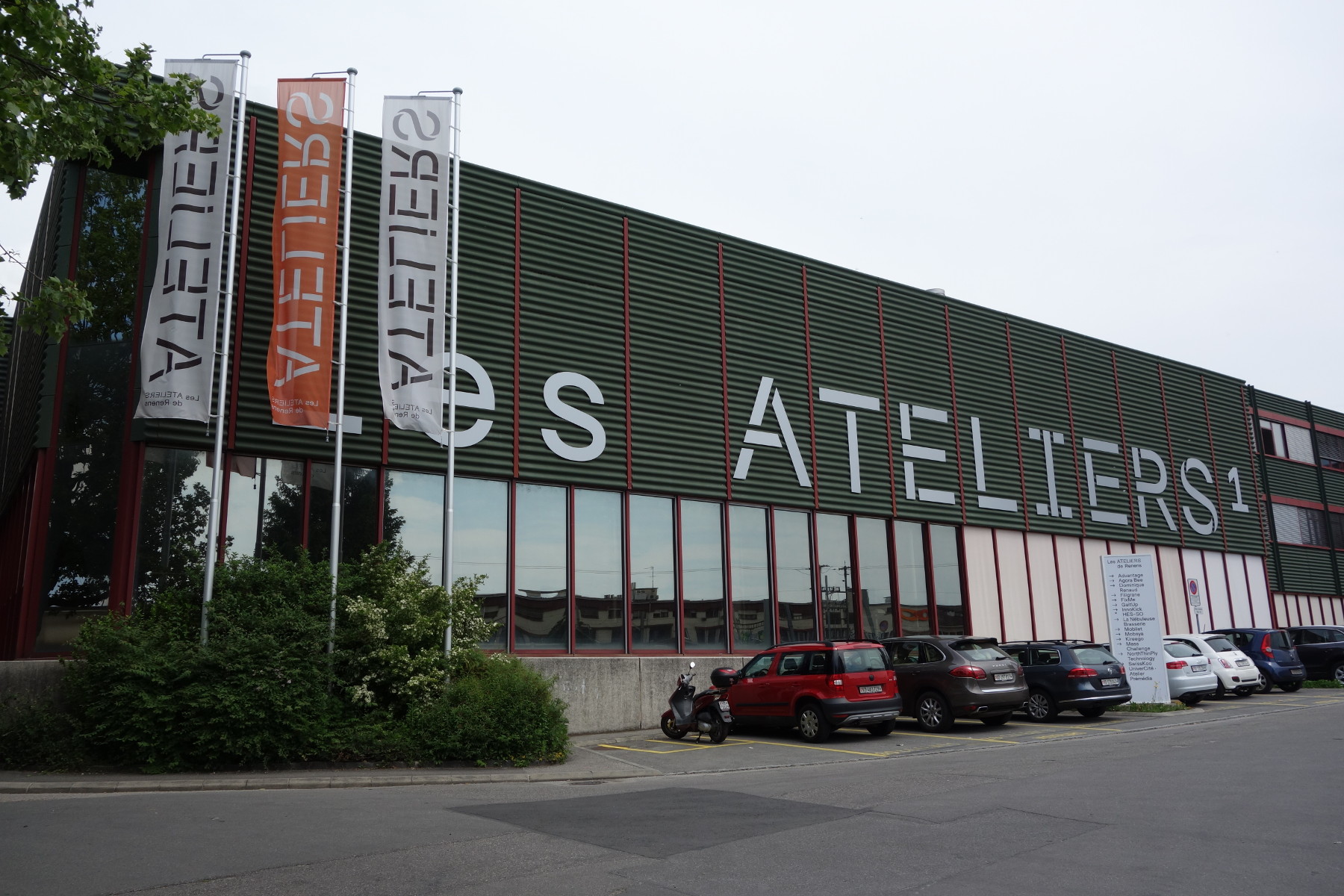 It brought together 15 makers and practitioners from different background and disciplines to design new methods, processes, protocols or tools that can support the study of makerspaces. Architects, designers, sociologists, makers, and much more exchanged and discussed about their different practices of research. There weren’t any formal presentations. We divided our time in short work sessions of discussions, field exploration, on-hands prototyping or online/offline experiments. At the end of the workshop, the results were presented during a small public event of restitution.

We experimented with new ways to observe, record and map activities, changes, discourses and stakes that surround the space. We tested together methods that can be reused to draw portraits of similar places in different contexts. 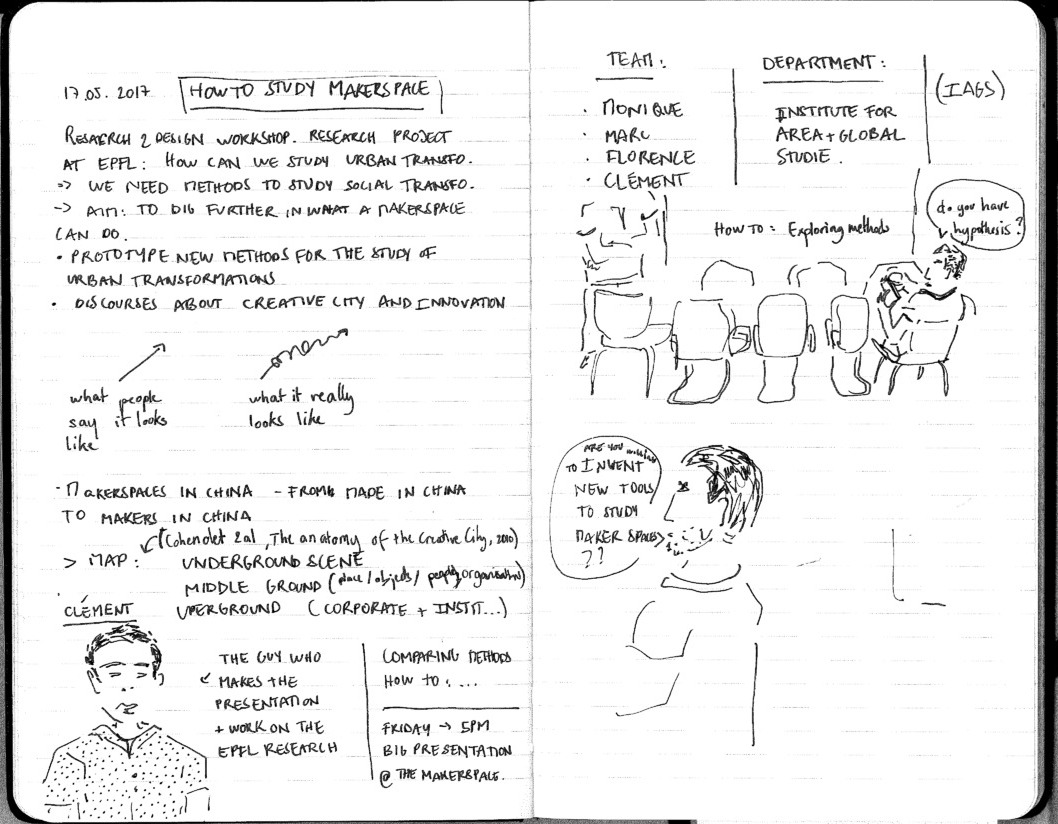 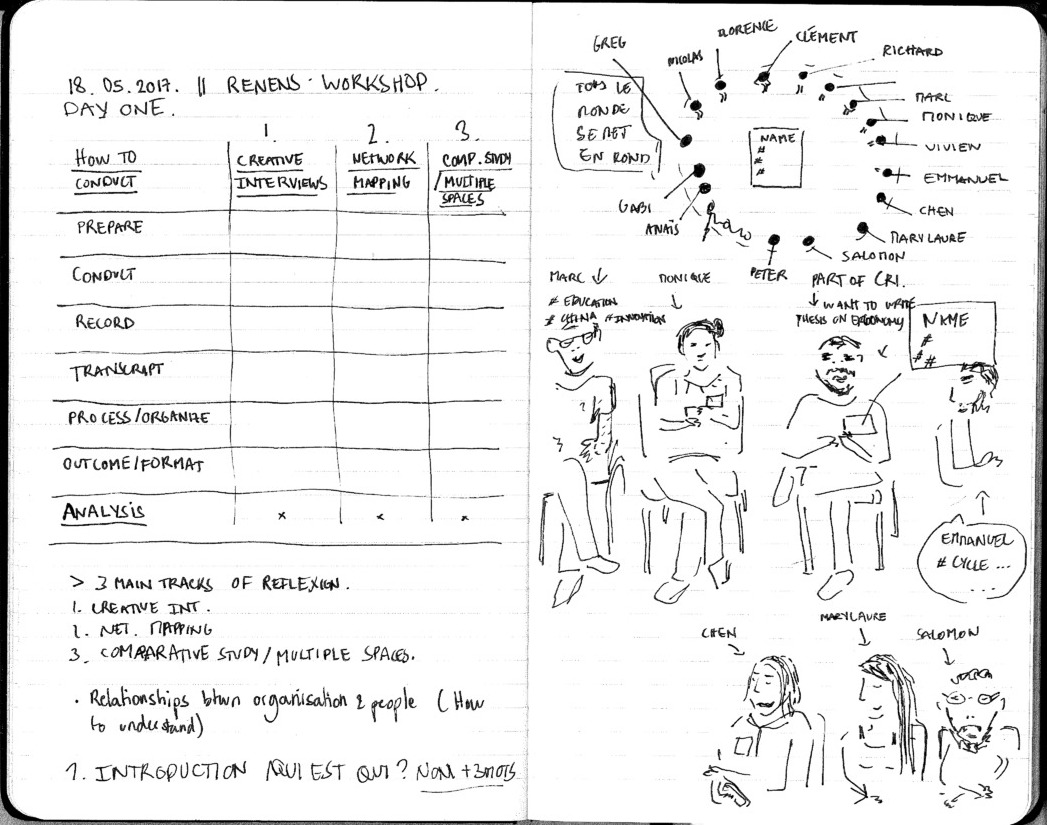 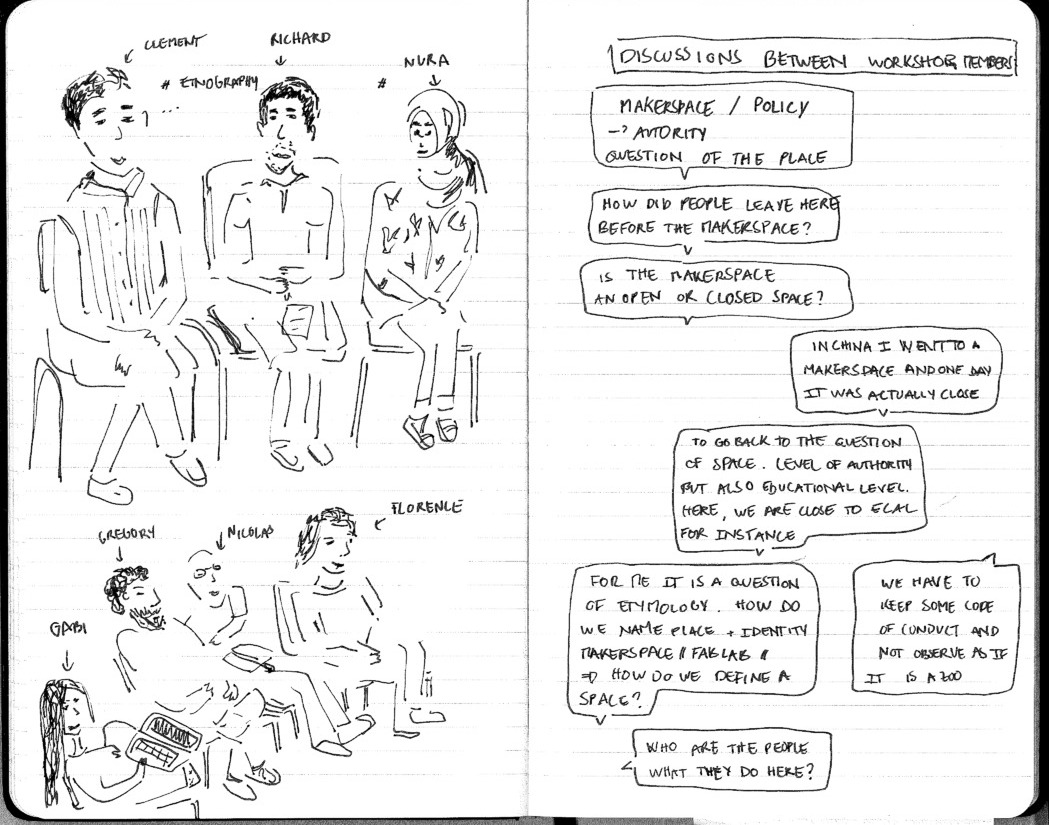 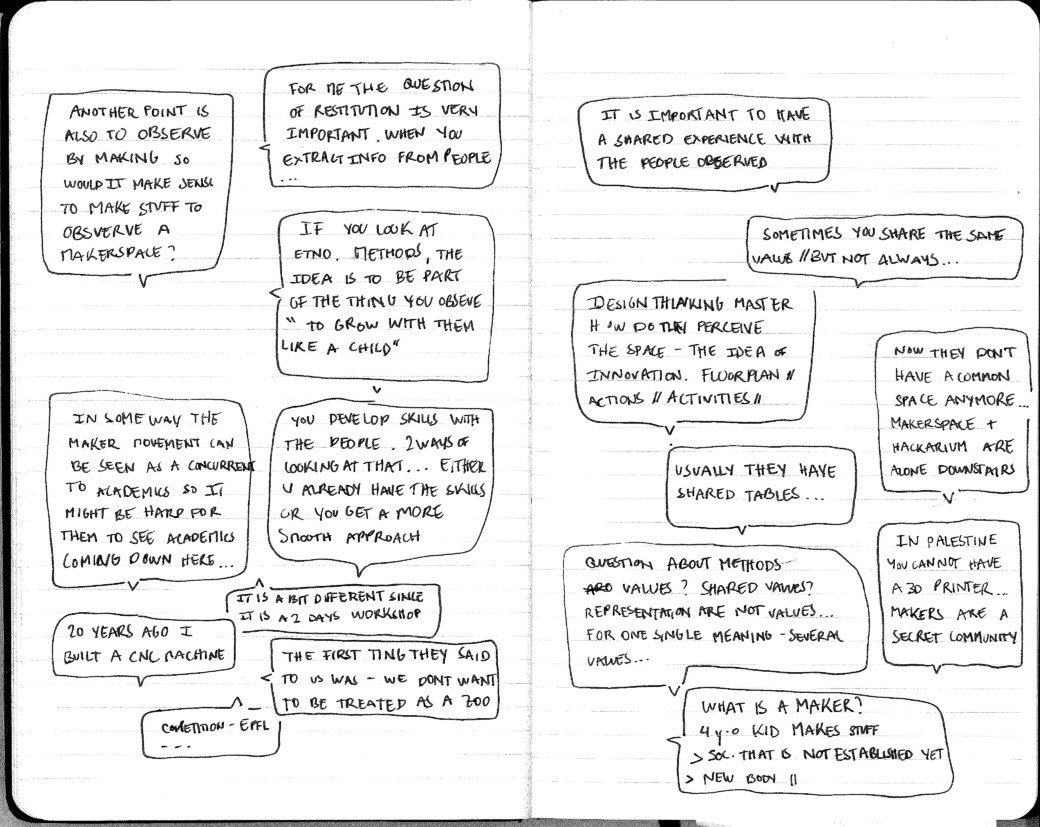 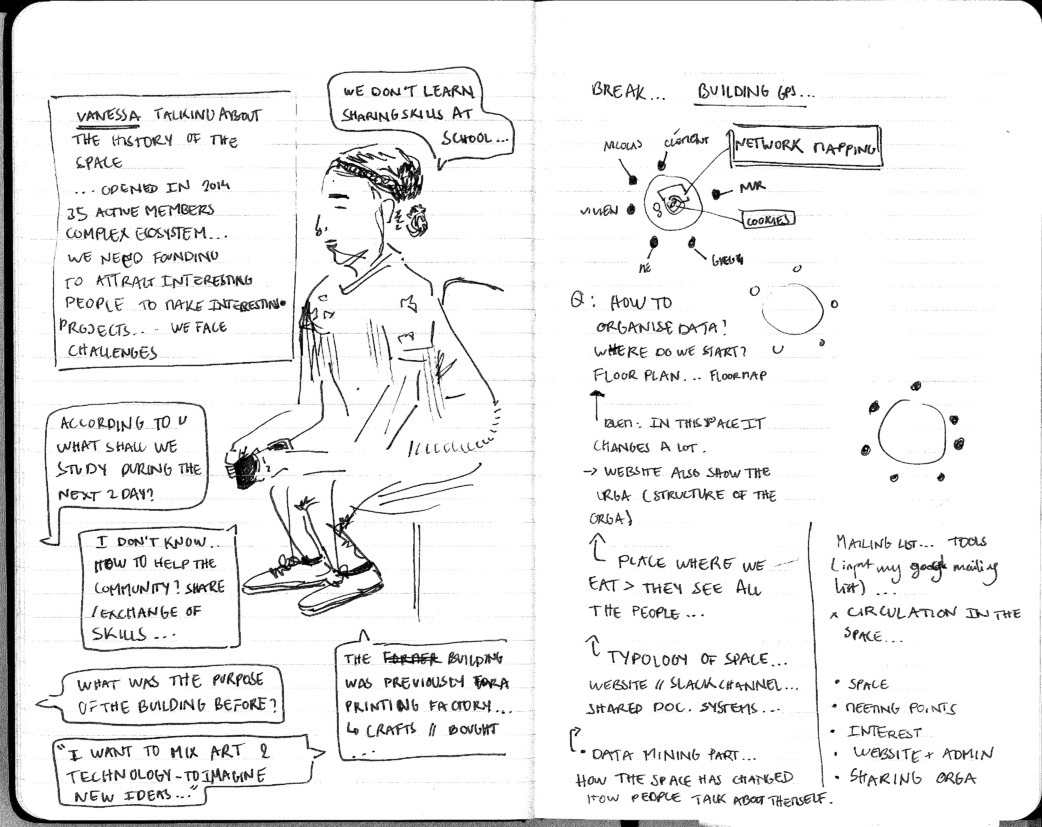 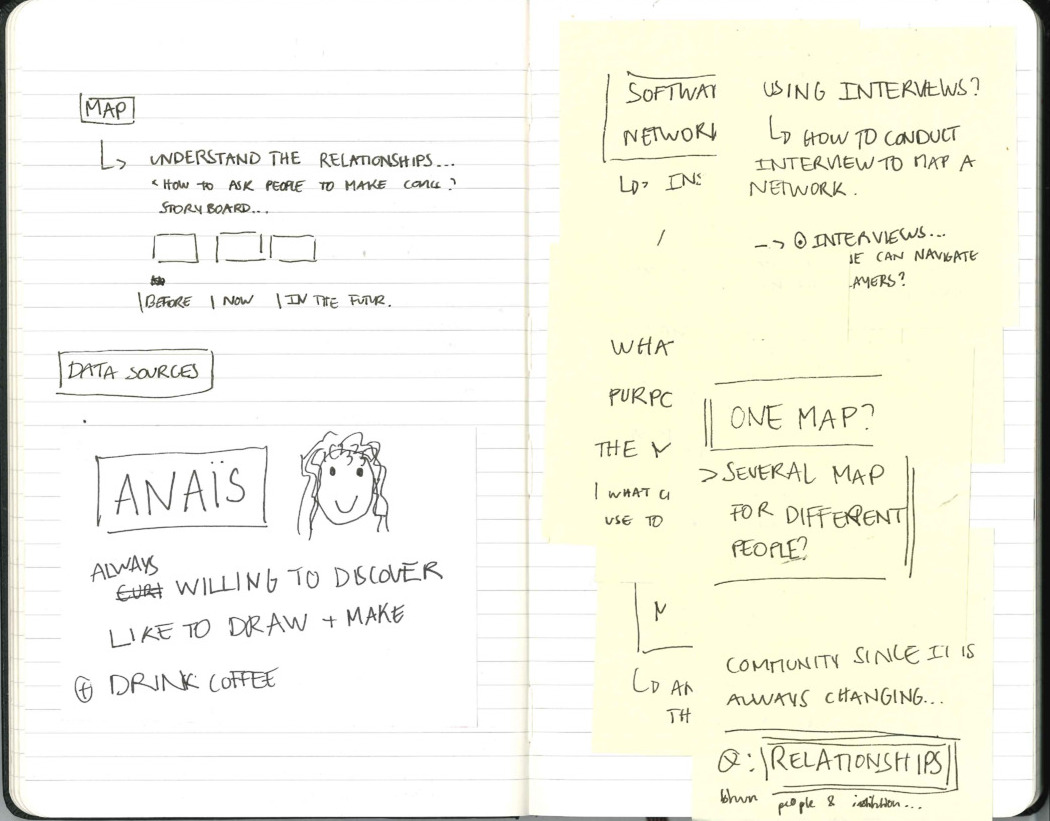 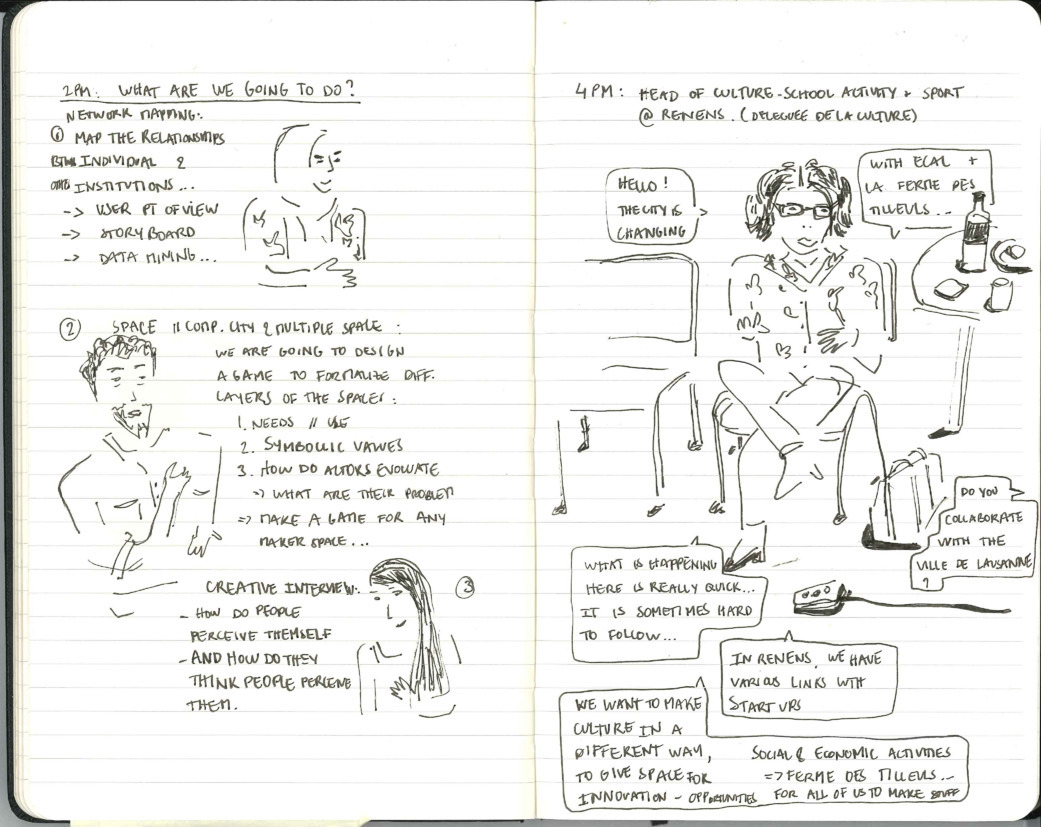 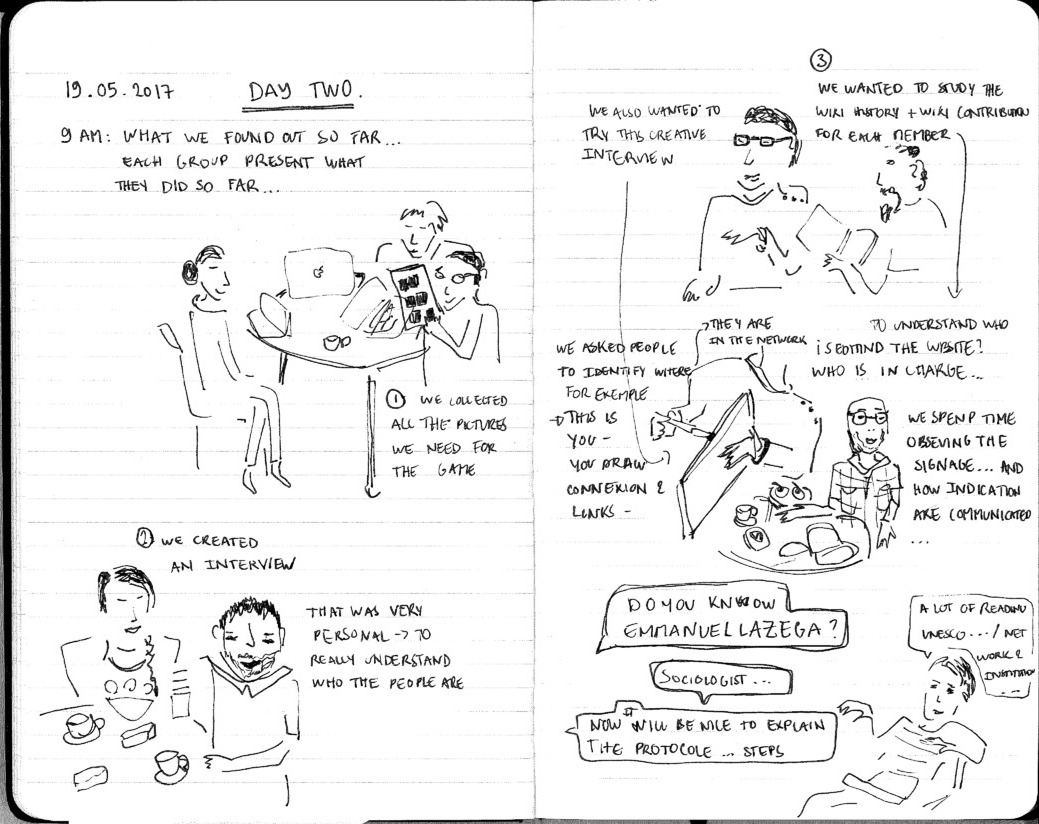 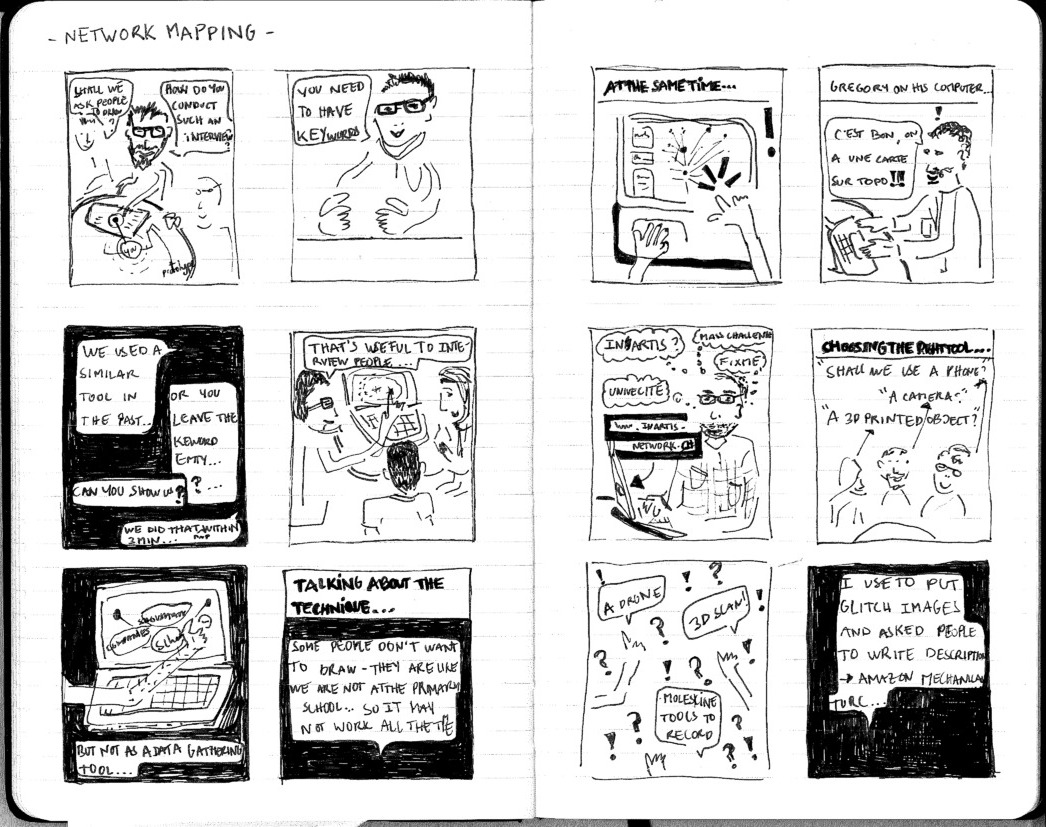 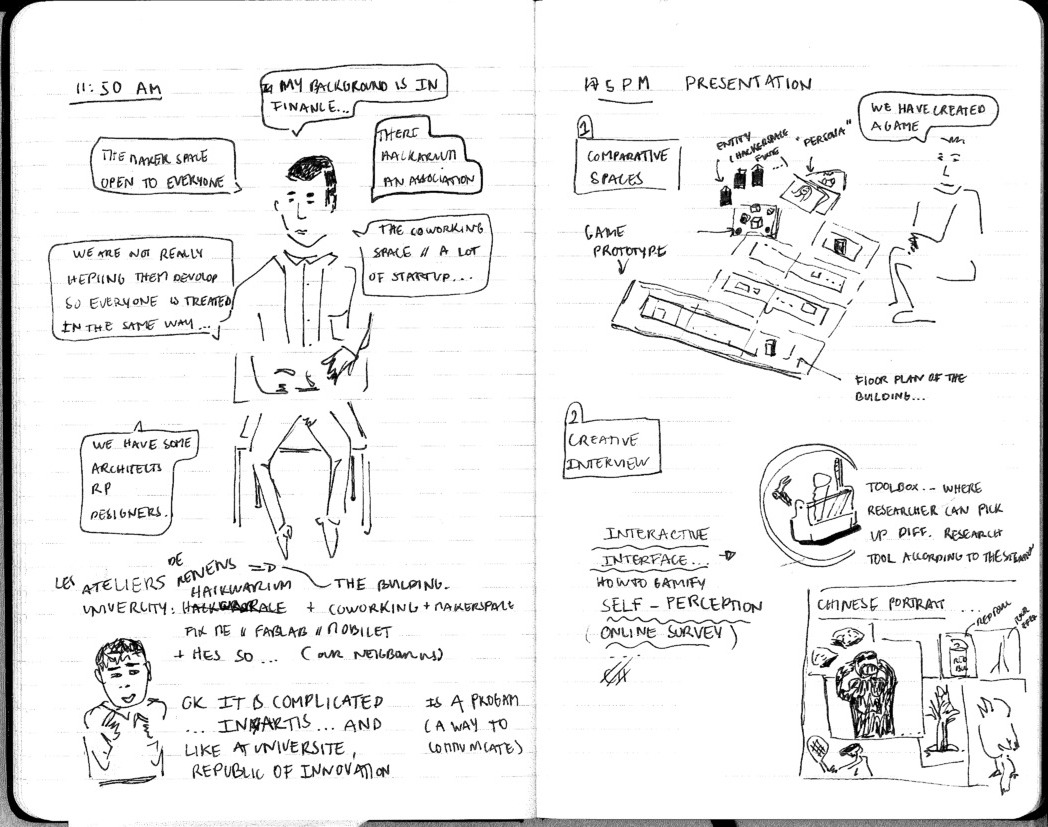 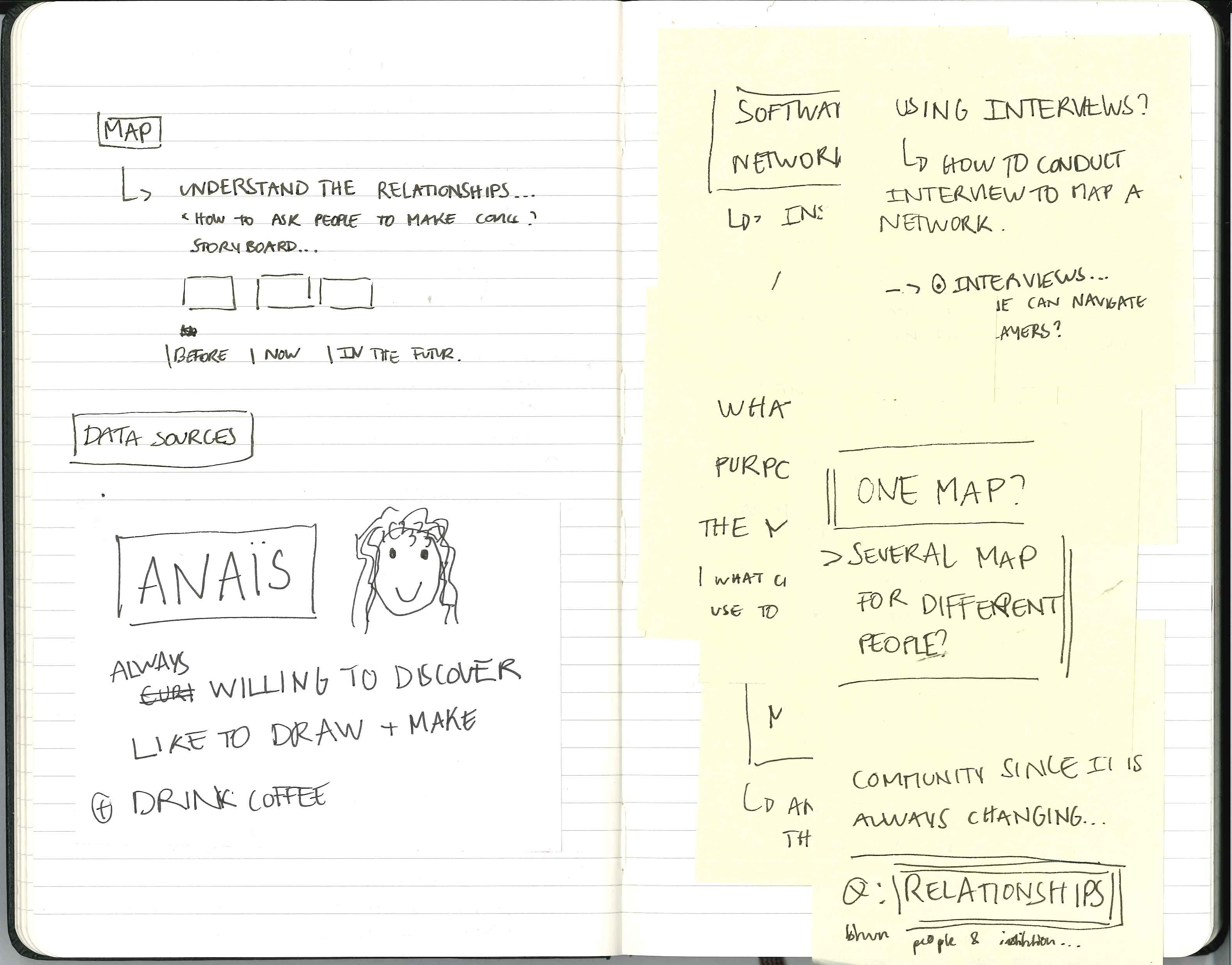 The 2 days were a complex process of common discussion, reflection and action – notes by Anaïs Bloch (cc)

The workshop started on May 17th evening by a short presentation of the project at the biohack lab Hackuarium.

The challenge offered to the participants was to conceive methods that could be used on the field. We wanted to lead experiment with different methods to study makerspaces. We came with open questions and a list of topics we wanted to approach during the workshop. Most were practical questions regarding fieldwork. 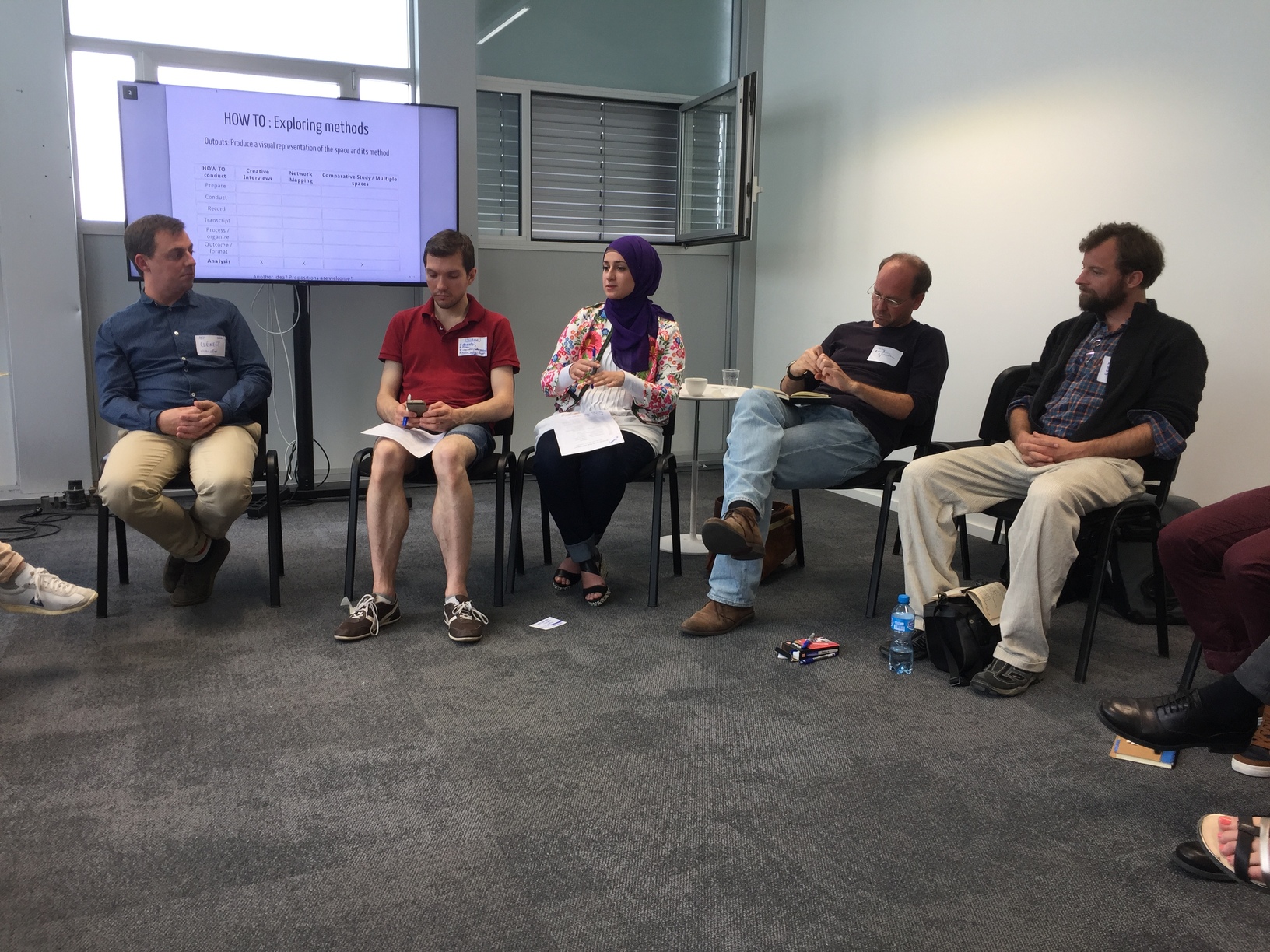 What can researcher make? 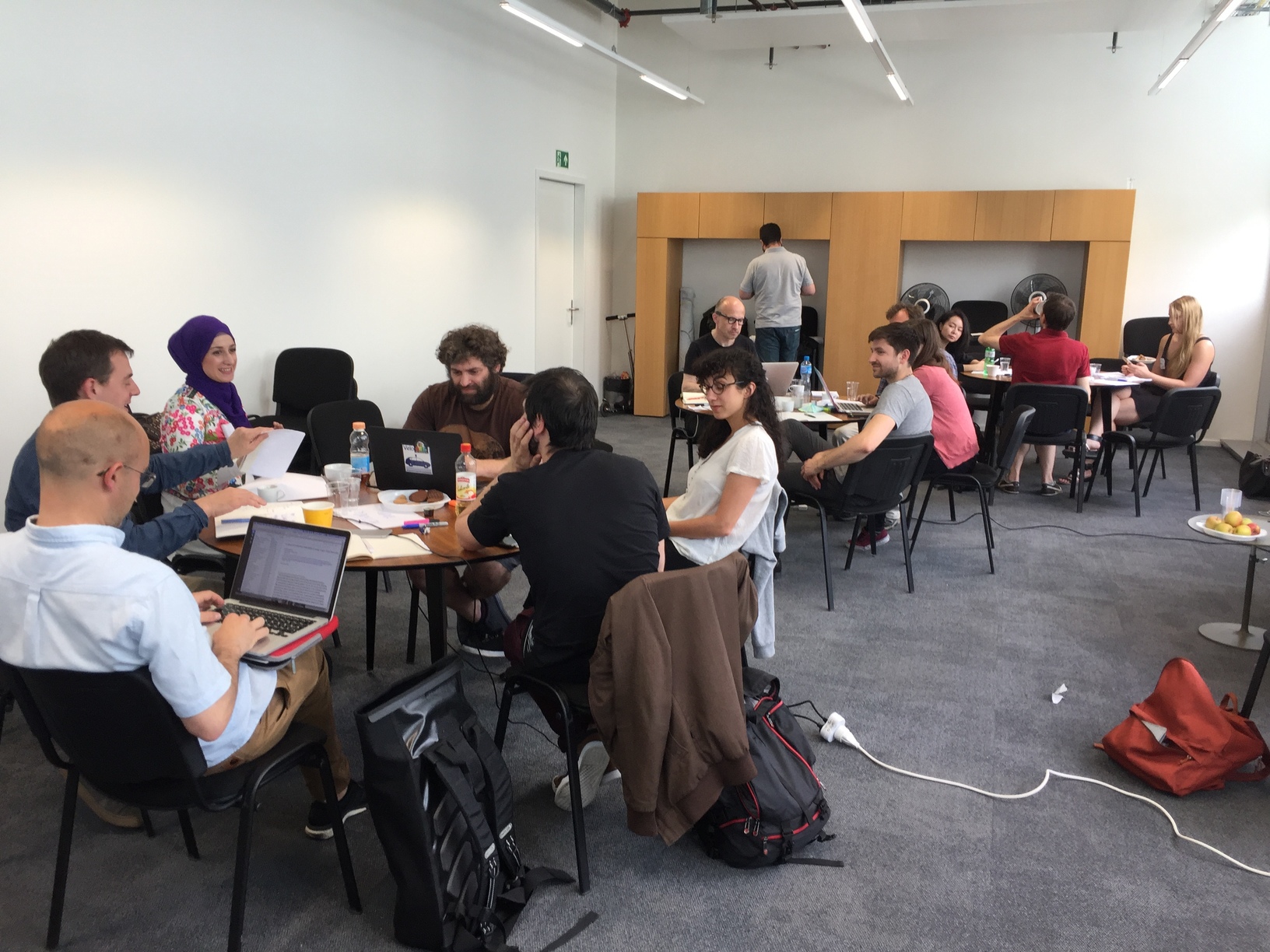 Finally we decided to divide the group according to three main thematics to organize the work during the three days:

3 groups of researcher working together during the 2 days – credits : Marc Laperrouza (cc)

To organize the reflection about methods, a basic template was defined to reflect the process of a complete scientific method.

The inquiry is conducted using an experimental board game that serves as basis to observe interactions between actors in a space. Players select a role from a serie of archetypal portraits. The board itself is a map of the place. Using portraits and exchange powers and information about the space. 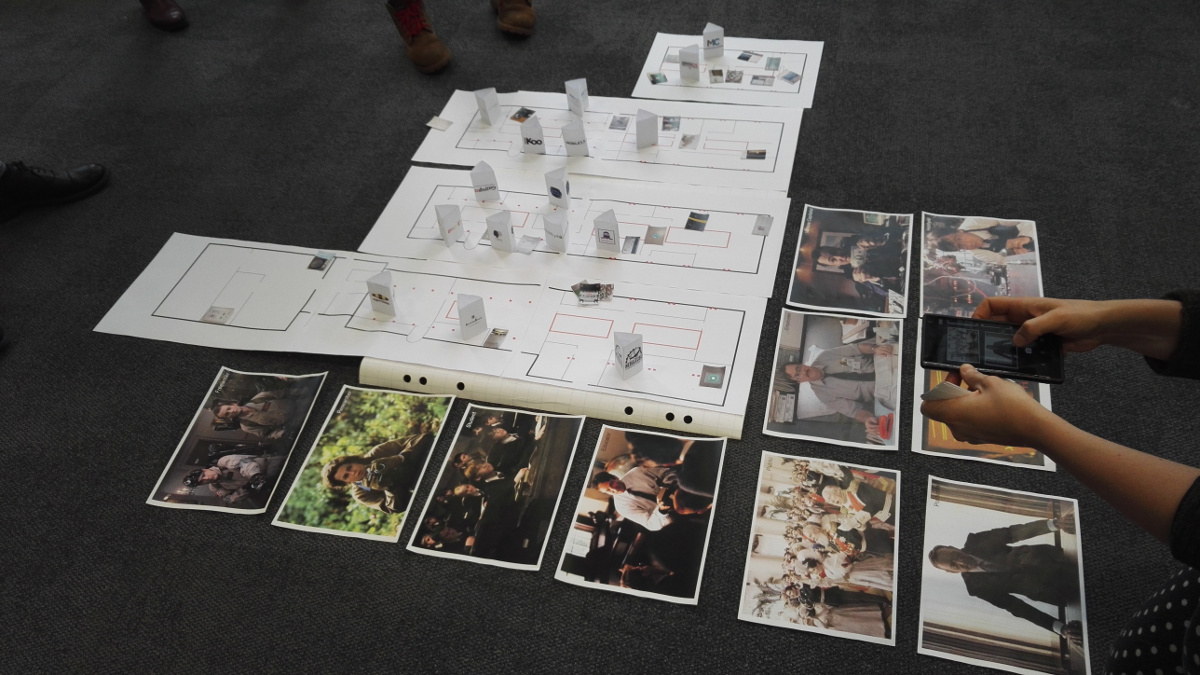 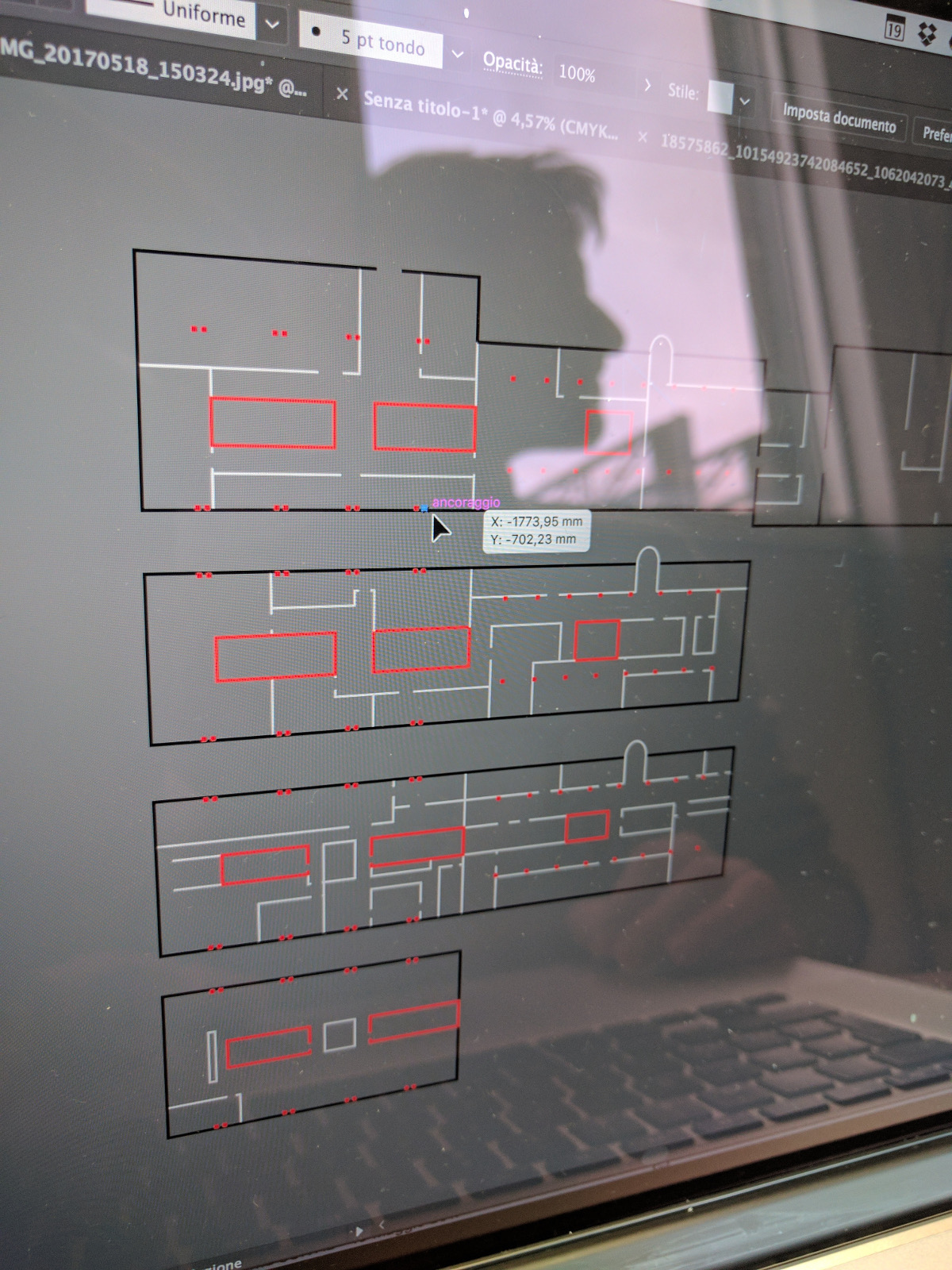 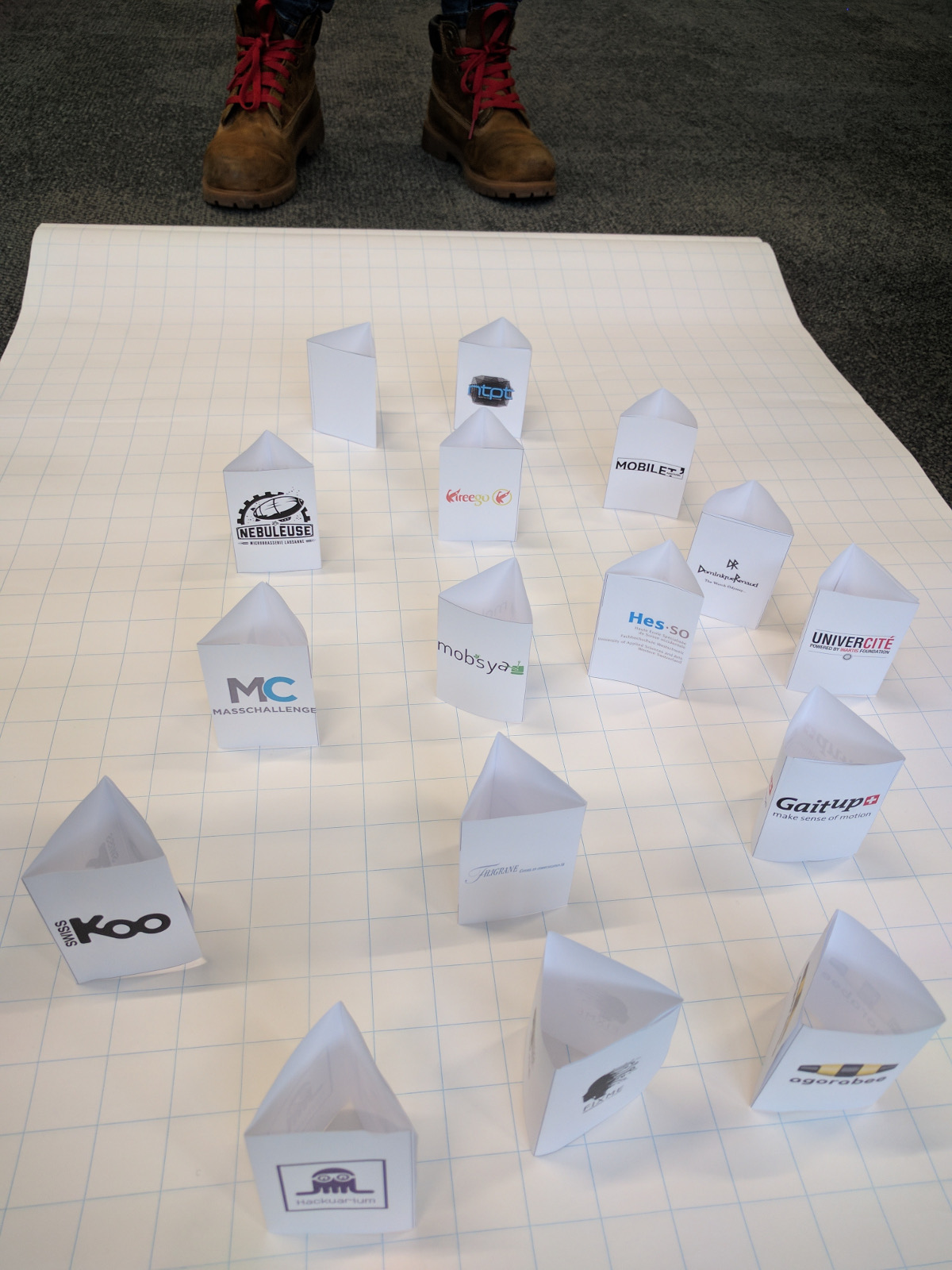 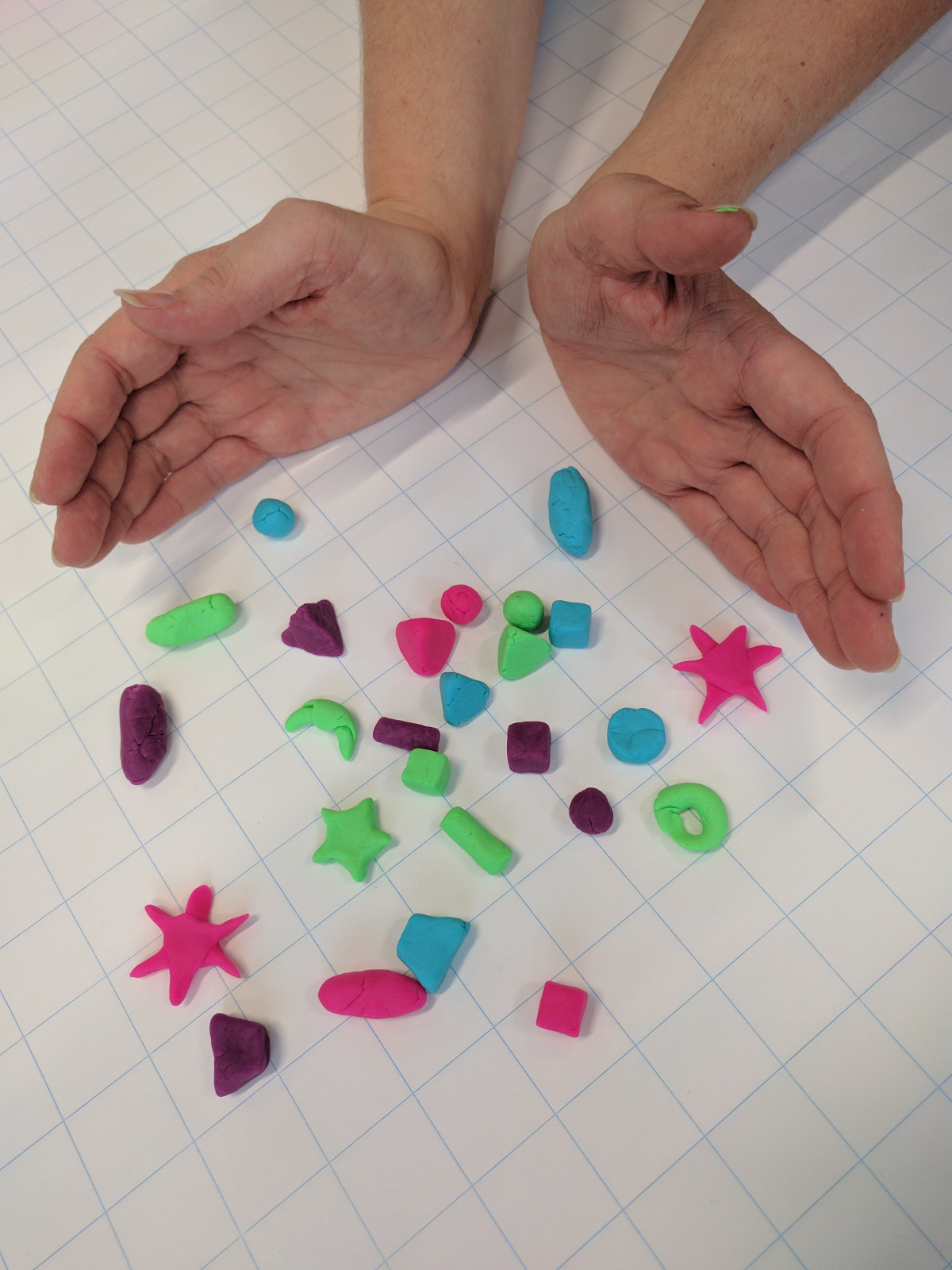 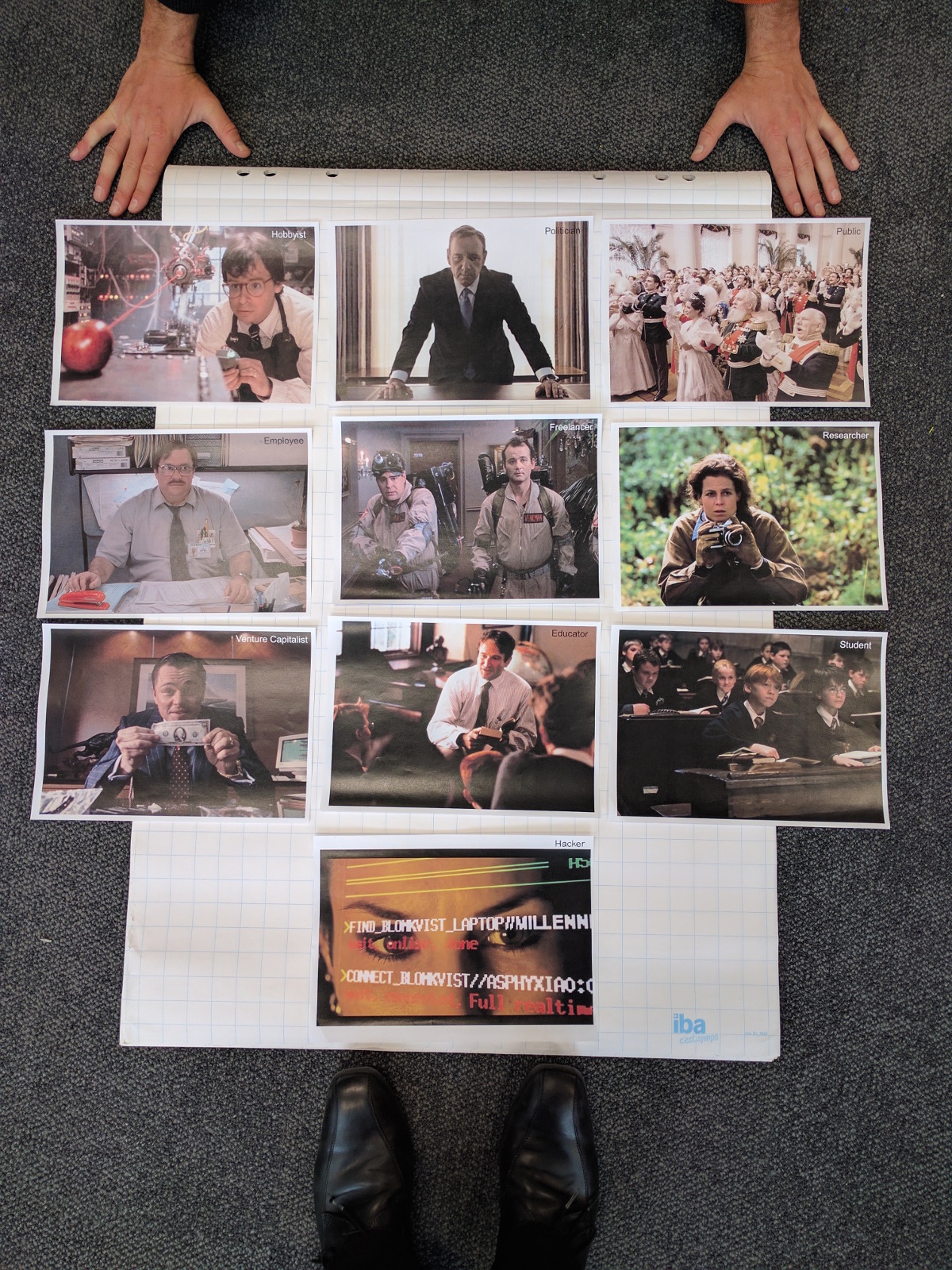 See the video of the restitution containing further explanation about the game.

Observation of signages during the visits of the space (offline), notice important signages. they are an interesting part for later discussions about how info is communicated and displayed to outsiders and users of the space. Also locks, trashes… (see pics) 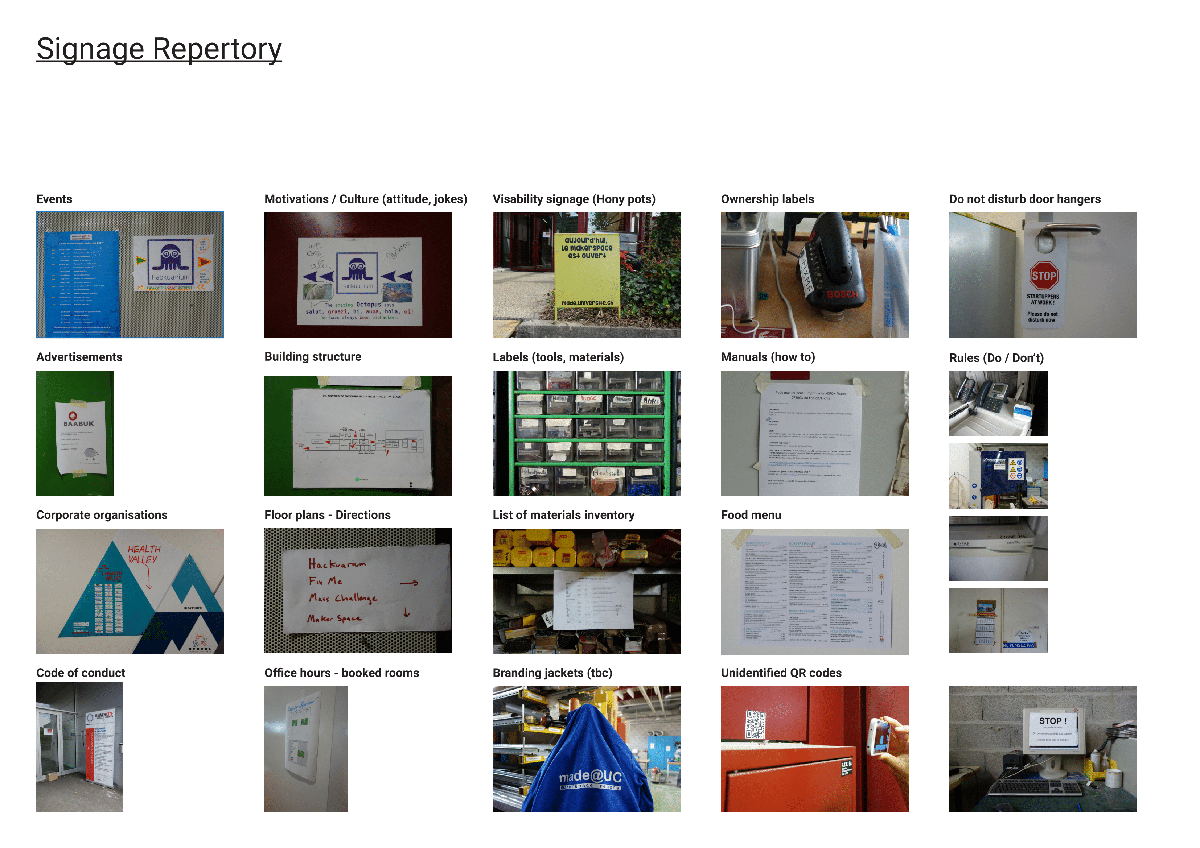 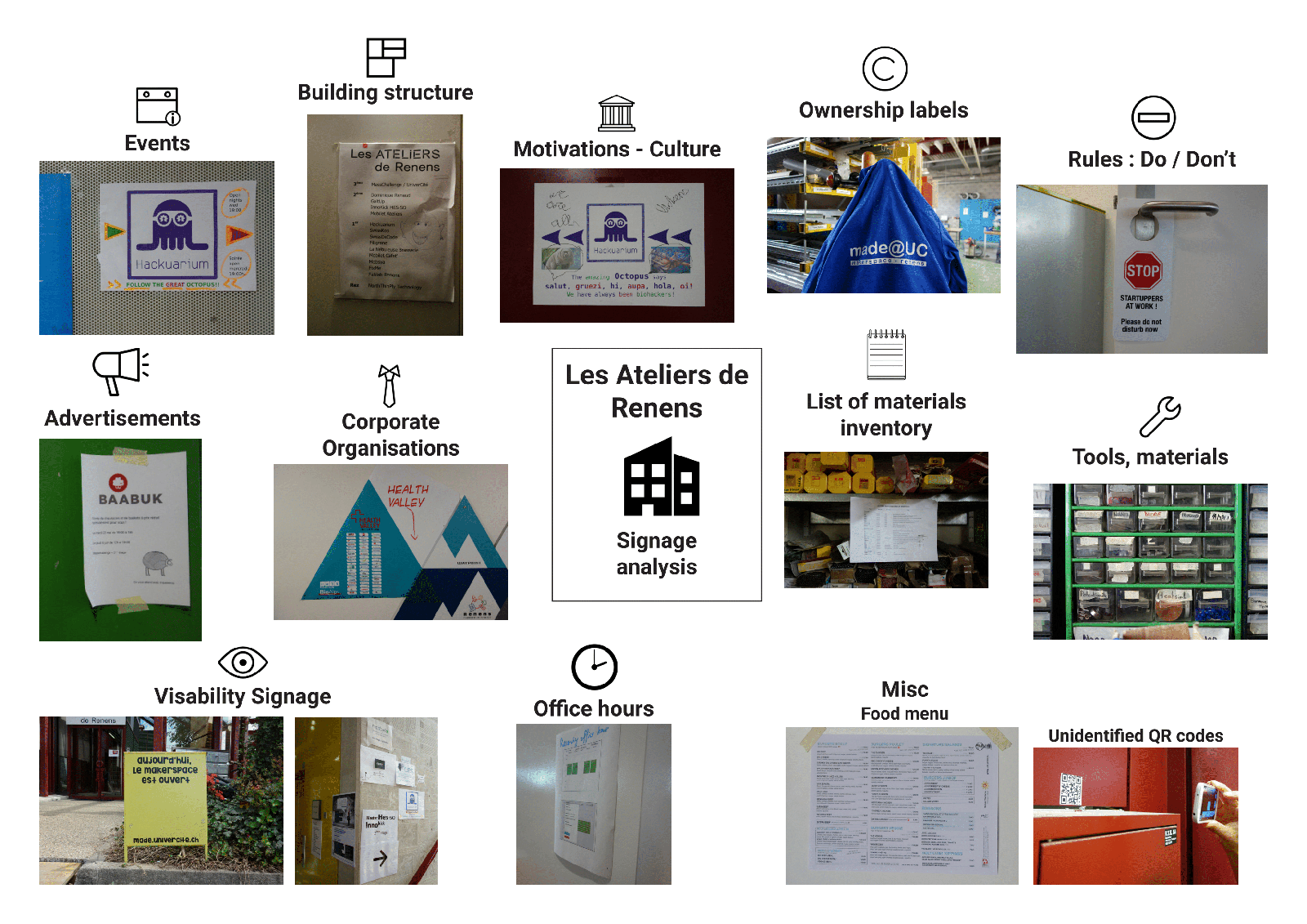 Analysis of online sources : data analysis of website and wiki sources, to define keywords, contributors and interesting logos/partners. Here, we extracted data, and processed words co-occurences. Visualisations were made with topogram.io

Organize data in two separate parts : information dedicated to insiders of the space (users, members, etc.), and to outsiders (visitors, event participants, etc). This is useful to understand the contrast between both, and a difference in discourse and approaches.

Conduct interviews Based on the data, you can write a set of questions to ask an interviewee tod describe its networks. We use drawing to support the discussion : “draw me your network”, then ask a set of questions extracted from the data seen in the space or online. 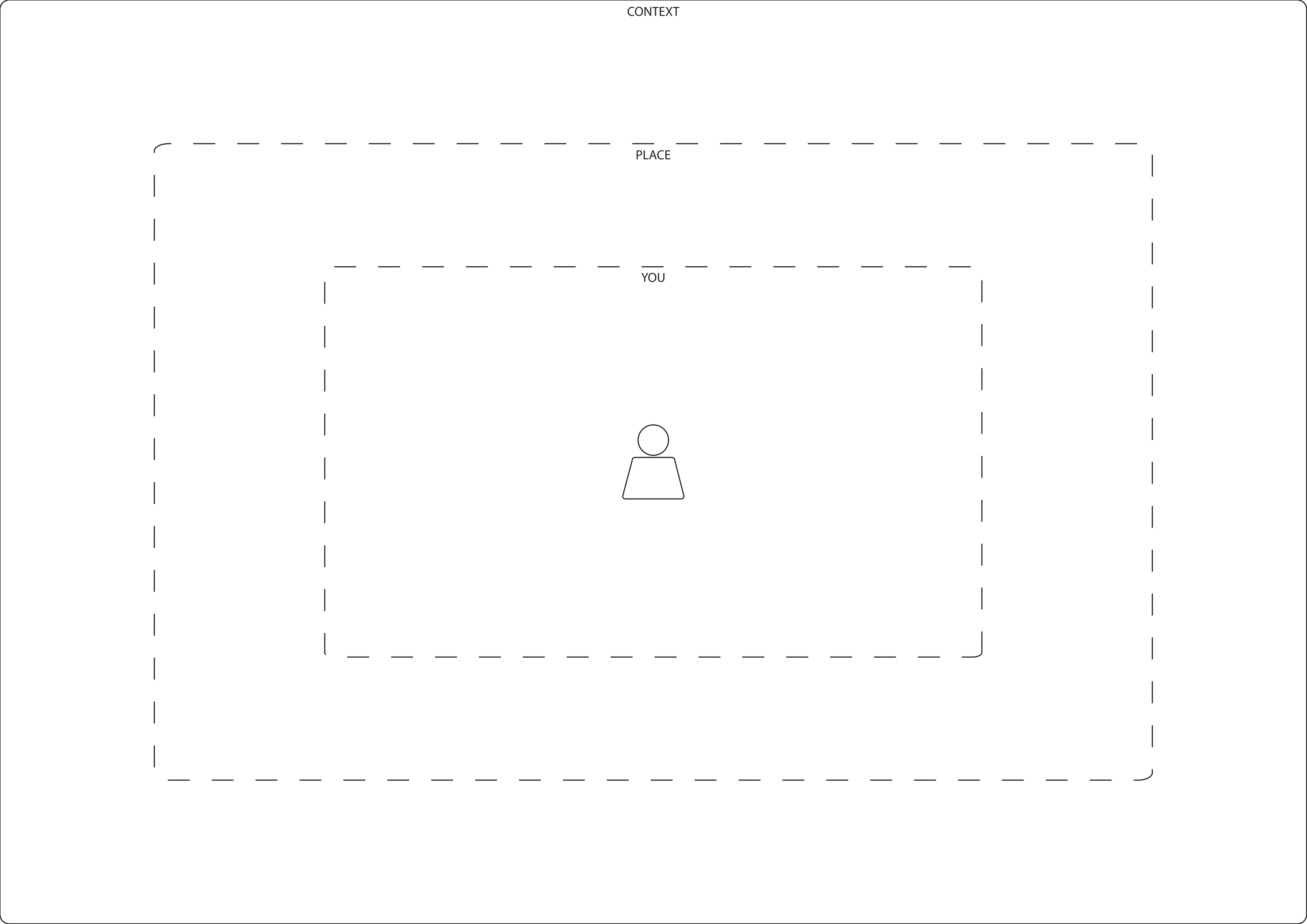 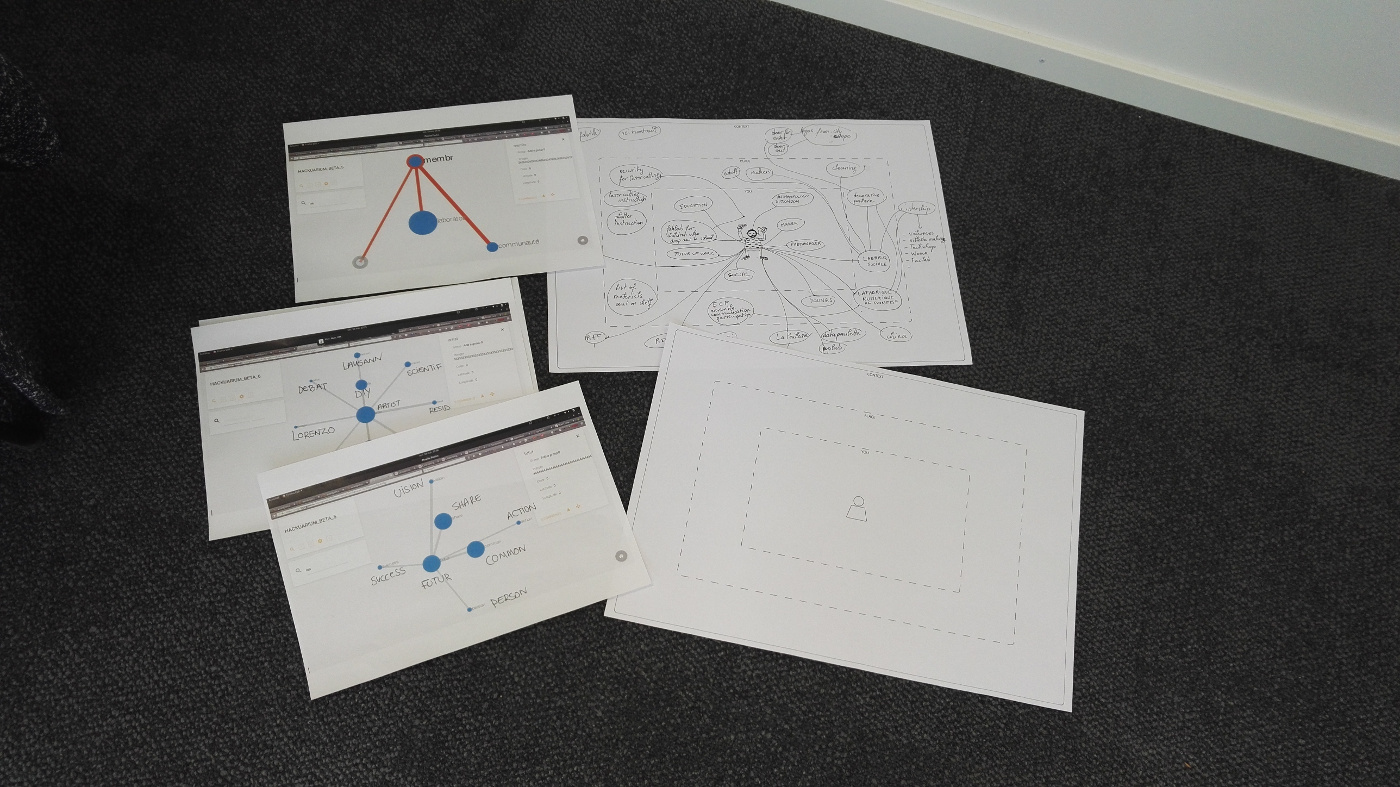 Read the HOWTO or watch the video fo the restitution for more info.

A toolbox for conducting interviews in unusual ways. The three models have been imagined and tested during the workshop. 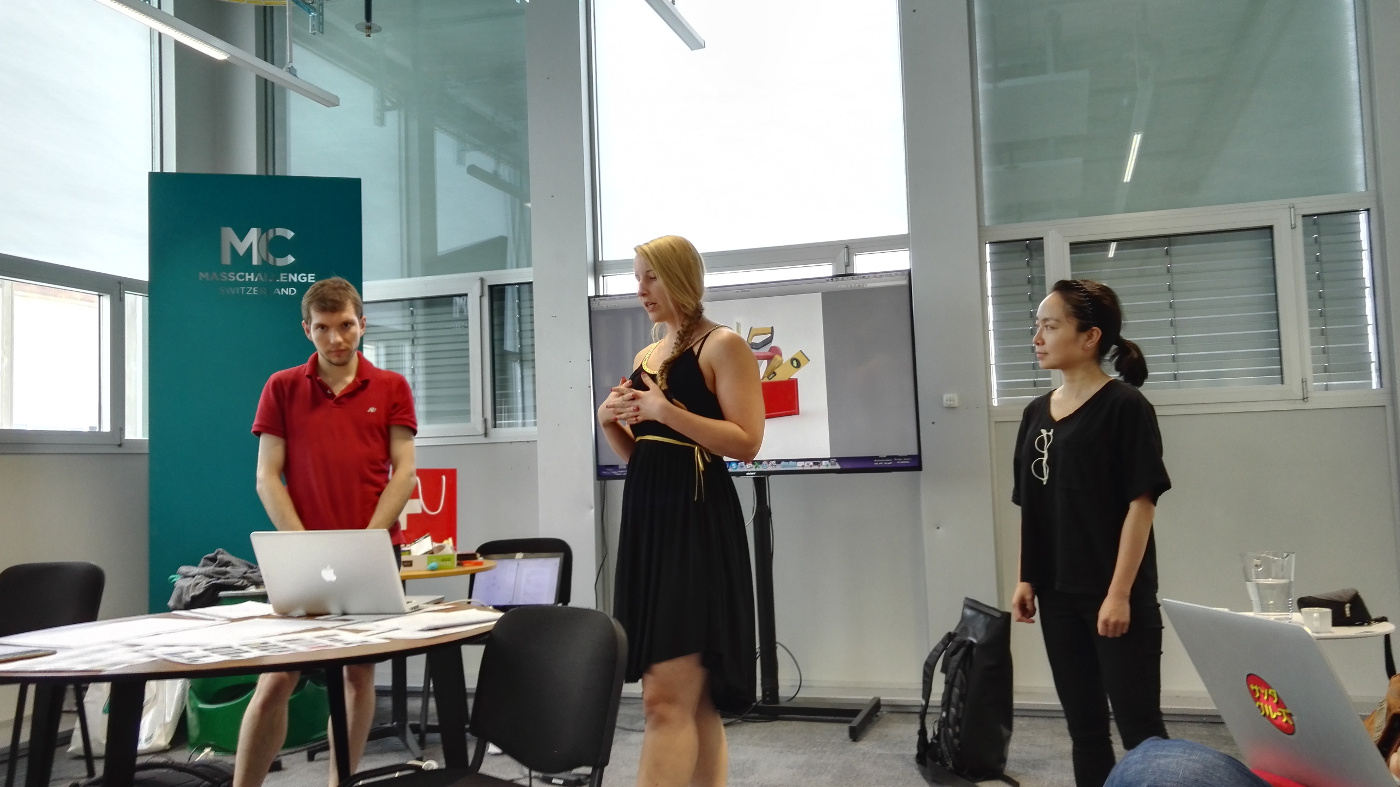 See the video of the restitution

We would also like to thank Univercite for hosting us and Christophe Rouillet for all his help regarding the organization, Michelle Dedelley and Vanessa Lorenzo Toquero for joining us for the session of questions and the members of Hackuarium for welcoming us the day of their general assembly.

The content on this website has been produced during the 2-days workshop “How to Study Makerspaces”. Feel free to reuse, copy/paste, fork, transform, upgrade and improve what you find here. You can also find more on the shared folder we used during the workshop to store all contents. You can also check the program and the list of participants

Feel free to get in touch with us for any further information.

All content on this page is available under the terms of the Creative Commons License Attribution 4.0 International.

« #nature #plant #water #life @kidproto... What cars do Chinese people drive in order to be identified as Chinese? »